Private apartments Podstrana - Browse through our offer of private accommodation in apartments and holiday houses in Podstrana, Croatia. Large offer, with most detailed descriptions available. Great prices and fast on-line booking of accommodation for season 2021 ! 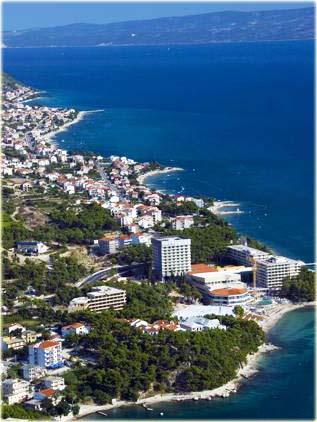 Podstrana is a municipality in Split -Dalmatia county with population around 10,000 people. It is a series of small settlements located along the coast from "Bajnice", the westernmost village of the "parish of Jesenice" up to river "Zrnovnica", the western border of ancient "Republic of Poljica". Podstrana is located approximately 10 kilometres south from Split and 14 kilometres north from Omis. It is connected to both towns by regular bus lines. Podstrana consists of several settlements along the coast ("Mutogras", "Sveti Martin" (Saint Martin), "Grbavac", "Grljevac", "Miljevac", "Strozanac") and of the old settlement located under the hilltop "Perun", 200 metres above sea level, named "Gornja Podstrana" (Upper Podstrana). From this old settlement, which throughout its history was the part of the "Republic of Poljica", coastal settlements developed during 20th century, with the development of tourism and construction of the Adriatic highway. Agriculture is still today important part of local economy, mainly thanks to the production of vegetables in "Podstrana field", a large area of arable land located close to the sea which is very uncommon in this region, where mountains usually stretch directly to the sea. With the mild Mediterranean climate of coastal area and good quality of soil, the "Podstrana field" also bears fruit to some of the most delicious peaches, for which Podstrana is renowned.

According to the earliest historical sources, the first known inhabitants of Podstrana were the Illyrians, members of the tribes of "Dalmati". Archaeological remains of Greek settlement have been found at the bottom of the "Mutogras" hill. At the end of the 1st century BC the Romans founded one of the oldest settlement in this picturesque area called "Pituntium" from which the current name of Podstrana developed over centuries. Roman writer Pliny the Elder from the first century mentions a Roman settlement called "Pituntium" located in this area. The inhabitants lived mainly of income from the estate, from cultivation of vines, olive groves and orchards. The records of the nature and position of the main settlement "Pituntium" indicates the origin of the pre-Roman period. It is assumed that the settlement was located in the area of "Stara Podstrana" and was surrounded by dry stone walls made of large stone blocks. Remains of these stone blocks can be found today in the wall of the cemetery of the church of St. Martin in "Sveti Martin". One of the blocks in this wall is a roman headstone that belonged to Roman general Lucius Artorius Castus. Many historians think that there is enough proof that this is the tombstone of none other than legendary King Arthur himself. In this location in "Sveti Martin" there are many other interesting archaeological findings. Other interesting remains from the Roman period of the history of Podstrana are the ruins of Roman building in "Polača" and "Cindro" castle in "Strozanac"

Croats arrived to this area in early seventh century and have founded several settlements on the slopes under the mountain tops. The oldest settlement called "Gornja Vas", was established in the vicinity of the freshwater spring and the source of potable water. In "Sveti Martin" in the year 839, Croatian prince Mislav made peace with Pietro Tradonico, the Venetian doge - the Venetian navy was no longer allowed to freely sail the Adriatic sea. In eleventh century, together with neighbouring villages they founded the "Republic of Poljica", an autonomous community that was organised as a "peasants' republic", and it's best known for the "Poljica Statute" first written in 1440. The people of Podstrana feared and respected the Statute and its laws and relied on faith and God. But above all they loved freedom and their homeland, which often had to be protected against invaders: Austria, Venetia, French and the Serbian aggressor. The Republic Poljica was destroyed by the French army in year 1807 and deprived of independence.

With the development of tourism in Croatia, it slowly became the most important economic activity and source of income for the people of Podstrana. Podstrana bases is tourism on the well know hospitality of the local people, rich cultural and gastronomical heritage, natural beauty, mild climate, clean sea and endless sequence of beautiful pebble beaches. The proximity of the largest Dalmatian and second largest Croatian city, the city of Split surely played an important role in developing Podstrana into modern holiday resort. Split is the largest port and the most important transportation, cultural and socioeconomic hub on the eastern side of the Adriatic sea. Podstrana is situated just few kilometres east from Split, and with regular bus connections it became a suburb of Split.

Podstrana stretches along the Adriatic tourist highway, a two-lane road which connects it with other tourist centres on Croatian coast. Along the road there are numerous hotels, restaurants, private houses where it is possible to find excellent accommodation for reasonable price. And along the coast, there is several kilometres long sequence of white gravel beaches, with lots of shade and many beach bars that are situated along nice promenade. The eastern part of Podstrana, an area named "Mutogras" is very popular spot for windsurfing, and surfing equipment is available for rent on several spots in Podstrana. There are also many other possibilities for water sports, like renting sea-scooters, kayaks, diving and renting a boat to explore nearby islands. The western part of Podstrana is home to one of the best hotels in Croatia, "Le Meridien Lav" with many services that are open to public like open and closed pools, tennis courts, welness centre, conference centre, parking, marina, casino, restaurants, bars, playground for children etc.